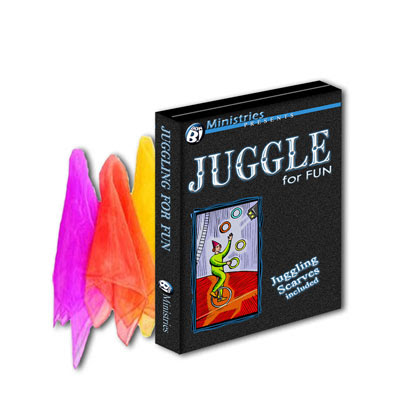 After teaching juggling to at least 700 people over the last 20 years, and being asked multiple times, "Why don't you just put out a DVD?", I've finally done it.
This DVD includes the entire step-by-step lessons I use to teach others to juggle.  It includes tips on learning other juggling equipment, such as balls, clubs, rings, spinning plates, etc.  It includes over 5 minutes of funny outtakes.  And the BEST PART is that it comes with a nice, quality set of juggling scarves.  You don't have to go out and buy ANYTHING; it's all here in one package.
Right now you can get them by either emailing me or calling my office (320-679-0060).
Price for the DVD and the set of quality juggling scarves is only $15.00. And I'll pay the postage within the United States.
If you've always wanted to learn to juggle, this may be your answer.
Stay tuned, because my other DVD is about ready too...
Posted by DonB! No comments:

Email ThisBlogThis!Share to TwitterShare to FacebookShare to Pinterest
Labels: DonB on the web, DVD, juggling, performing

Well, after a busy Spring, filled with show stuff, family stuff and of course, Easter, Summer is here.
----------1---------
The "Sens de Vie" show here in Mora was a success.  The 300+ people that came to the theatre for it all said it was a great show.  I loved it, and felt even more energy than usual, probably because of all the people I knew in the audience.
Thanks to Harris III and his wife, Katie, for their willingness to put on the entire BIG show, regardless of how little money they would make.
Thanks to Emmanuel Baptist Church for helping cover the advertising costs, and for putting up posters all around the community and neighboring cities.
Thanks to the folks that helped unload and re-load the truck, even into the late hours of the night.
Thanks to Danny & Matt for working so hard making us performers look great.  You guys ROCK!
Thanks to KBEK and WCMP radio stations for going the extra mile on interviews and radio spots.
Thanks to Kanabec Publications for putting together such a nice looking ad in the paper.
Really, thank you to all of the people that gave of their time, their finances and their resources to make it possible.  Without all of you, there would have been no show.
----------2---------
As I look at my calendar, I see that things are a bit slimmer this year, but by the grace of God, the phone still rings, and churches still invite me to be a part of the outreach to their communities.
As for calendars, my laptop hard drive took a nose dive 2 weeks ago, but the Apple care center took care of everything for me.  No cost, but I got a new hard drive installed.  And thankfully I was smart enough to back everything up onto an external drive that I had just purchased two days prior.  The only thing I haven't been able to completely restore is my calendar.  I am sorting through everything in my office making sure that I don't neglect showing up for a show this month.
----------3---------
Both of our kids, Dale & Deanna, have their birthdays in March.  Instead of buying expensive toys that break, or electronic gizmos that wear out, we did something completely different: We took a family trip.
We loaded up our car and headed to Chicago.  We had made reservations at a 4-star hotel (that we got for a 2-star price) right on the waterway of Chicago.  We were on the 17th floor, so we had a beautiful view of the Chicago skyline.
We purchased a $5 all-you-can-travel pass and toured around Chicago, including the Federal Reserve building, the Navy Pier and up & down the Magnificent Mile shopping area.  Most everything was too expensive for us, but we did find the Lego store, a huge Borders Bookstore and some coffee!
The finale of the trip was on Friday evening, when we dressed up and hopped on the e-train.  We arrived at the theatre, just in time to go see the Disney production of "Mary Poppins".  It was amazing!  The sets all folded out like large pop-up books.  Thanks to an illusionist I read about, many impossible things happened onstage that would be impossible otherwise, such as Mary pulling large things out of a small carpet bag and a human-sized doll coming to life from a tiny dollhouse.  We had a supercalifr......
We had a supercalifragile.....
We had a supercalifragilistic ex....
We had a great time.  The entire trip was a memory that no gizmo nor gadget could replace.
----------4---------
Well, I have to go outside and pack for my show tomorrow in Rochester, MN, at Evangel United Methodist Church.  It is my 6th appearance there over the years, and I look forward to seeing all of the great people there again.
May all your days be circus days...but without the sneezing.
DonB!
Posted by DonB! No comments: