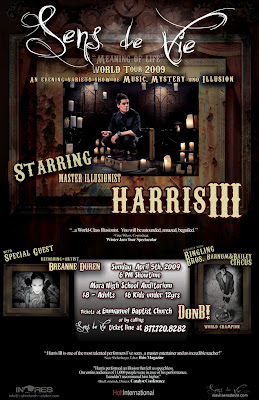 I hope to see you all there.
DonB!
Posted by DonB! No comments:

Email ThisBlogThis!Share to TwitterShare to FacebookShare to Pinterest
Labels: DonB on the web, magic, performing

It is Sunday morning, March 1st. I am writing this while I fly to Fort Wayne, Indiana, at the beginning of the busiest period of time I've seen in over a year.

Friday night I performed at Camp Lebanon, near Upsala, Minnesota, for their Mega-Fun 2 event for 4th-6th graders. What a great bunch of kids and leaders! This was my 44th appearance at Camp Lebanon, and that is thanks to "Bobber Bill", the director of the camp for many years.

Over the years that I have been going there, I have watched their kids be born, grow up, and now 2 of them are off to college. It's hard to believe that I have been doing ministry entertainment for so long. This is the beginning of my 20th year. Wow. And I feel barely over 25. :)

Last night, with the help of my wife, Debbie, and our son, Dale, I did my biggest show, "Evan-tastic", in Milaca, Minnesota. Milaca Free Church, with the guidance of Tom Krauel, organized this night as an outreach event for the local community. They hung up posters, invited people by word of mouth and did radio advertising (I even did a 15-minute radio interview, topped off by performing a short magic illusion over the radio waves). It was a free event, and therefore had no idea if 20 or 200 people would show up. With the show starting at 7 PM, they were going to open the doors at 6:30, but there were already enough people waiting to get it that they opened the doors then. As I sat talking with the pastor prior to the show, people kept coming and coming and coming. By the time the show started the bleachers were 3/4 filled. The final count was over 300 people, and they were a GREAT audience. They laughed easily. They clapped enthusiastically. They participated graciously. All of these factors made my job really easy and enjoyable.

After the short intermission, I presented my own testimony and the Gospel presentation, and for the next 12 minutes people were coming forward to talk with the pastor, as well as the many folks from Milaca Free Church. There were kids praying, adults praying, and even an entire family praying along with the pastor. The show ran a full 90 minutes, and I was tired.

It always amazes me that God uses the most common of us (meaning ME) in ways that we can never imagine if left up to our own. I always pray that my part of the show will go as perfect as possible, but it also seems that the more troubles I have in a show the better the response to the message is. Well last night I was blessed in both ways: the show went great, and the response to the message was great. A double blessing.

Right after the show, as volunteers helped Debbie take down the curtain and pack the rest of the show, I packed what I needed into 3 suitcases and then drove down to Minneapolis.

I spent the night at my parent's home, and woke up at 5 AM to get ready. My dad drove me over to the airport and I boarded this morning at 7 AM.

I am now sitting in Chicago's famous O'Hare airport, waiting to take my final leg to Fort Wayne, where I will do 2 shows for an Upward Awards night at Fellowship Missionary Church. One show at 3:30 and then another at 6 PM. The weather in Chicago is as cold as it was back in Minnesota: Freezing.

Busy Weekend PART 3
The flight to Fort Wayne from Chicago was a short flight, and very few passengers. This allowed me to move into the exit row and straighten my legs out.

I arrived in Fort Wayne, but only 2 of my 3 suitcases made it with me. After a 30 minute fiasco, I was made aware that my suitcase was NOT in Fort Wayne. Anywhere. So Joe picked me up and we headed over to the church. It has been 2 years since I last performed at Fellowship Missionary Church, but the minute I walked in I remembered what a fun time we had last time (performing for the adult volunteer leaders). This time it was for 250 elementary aged basketball players and their families.

As the first show drew nearer and nearer to starting time, I was very nervous about how to do the show as best I could without the props in that 3rd suitcase. Sadly, that suitcase had parts for all 3 of my unicycles, so I knew I'd be unable to incorporate them at all into the show.

After all of the player introductions and a 10 minute season highlight video, the Upward leader, Robbie Sondag, looked over at me, and I gave him the thumbs up, telling him that I was as ready as I could be.

At that moment, I heard a scuffle behind me in the hallway, and running towards me was Joe and Jim, and they had my suitcase! Thank God for these guys, because as I started performing in front of the curtain, they actually assembled all three unicycles backstage, and as they were together, they would slide them through the curtain near my crates so that I could see that they were ready. About 3 minutes before it was time to start the unicycle routine, all three unicycles were there, assembled and ready for action.

The first show went great, but a little short due to the rest of the equipment still in the suitcase.

When the 2nd show started, I had on my nice pants, nice shirt and my favorite DonB! tie, all of which were in suitcase #3 during the first show.

Robbie told me to take 40 minutes for the 2nd program, so I did the whole show, and the audience was very responsive.

It is days like these that show me over and over again that any "success" from these shows is NOT based on me. God works through the details and makes it works REGARDLESS of me and my equipment. He places the right people, in the right places, at the right time, to hear the right message and respond in the right way.

FINAL NOTE: One guy did not believe that there were guys backstage assembling my unicycles, so he ran back and snapped two cell phone photos. As soon as I have those pics, I will post them here.

I am now in the Fort Wayne airport, waiting for my first connection through Chicago, back to Minneapolis. I had a great night of sleep, and was taken to a great pancake house for breakfast. Which reminds me: when we returned from breakfast, Jim, the guy that assembled my unicycles so quickly backstage, was there fixing the broken handle on my suitcase #3. Amazing guy he is.

I will be heading back to Indiana this Thursday for two more programs, so I'll see how much fun I can have on that trip.