I received an email that I was listed on the Country Music Television website. So I went there to look. As it turns out, I am listed as "on tour" for a few dates because of the K-Love Friends and Family Music Cruise next January, out of Miami.

I'm in the same list as country greats such as Charley Pride, Emmylou Harris, Lynyrd Skynyrd, and Donna the Buffalo (really). Click HERE.

I'm honored. Back to work now.

Email ThisBlogThis!Share to TwitterShare to FacebookShare to Pinterest
Labels: Christianity, DonB on the web, performing

Just today I found this short article about "worry". In my own life, when things get hectic, I have a tendency to worry. I am generally an "anxious" person also, mentally stewing about upcoming shows, ministry events, bills, family, etc. However, over the last two years, I feel a lot less anxious about things, even when they seem heaped on together. Maybe I'm older (and wiser?). Maybe other reasons. The good thing is that the less I worry, the closer I feel to God. And, it's the other way around. Checkout this article. I hope it inspires you too. -DonB!

Do You Worry? Consider The Garage Method
Author: Jim Elliff

A former professor of mine, now a successful author of Christian fiction, used to dismiss his anxieties by repeating this mantra: "Oh well. It doesn't eternally matter." For him six words conquered all ills. He slew his worries with a phrase, with a mere wag of his tongue. I'm not sure he was right about things not eternally mattering, but his blood pressure remained low and in many ways, he turned his worries into trust.

It is sort of an embarrassment now, but I must admit that years ago, when I was a teenager, I avidly read the arcane MAD Magazine. At the time it was the rage among those in my school. If it is like most forms of media, MAD is likely less pure now than it was then. At that time it was just—well, silly. Alfred E. Newman, the central figure in every magazine, was best known for this one phrase—"What? Me worry?"

Alfred E. Newman was nobody's model, but everybody's alter ego. Can we have a world without worry?

Here is what some people do with their worries:

They bury them. Many people stuff their worries deep inside only to have them resurface later in other forms such as physical problems related to stress or anger.

They pass them. Comedian Erma Bombeck once said, "I don't have stress, but I think I am a carrier."

They eat them (that is, they eat in order to forget them).

They drug them. Liquor and drugs are well-known methods for drowning worries.

Years ago I knew a man named Mr. Kidwell. He was a lovable man, a president of a bank, who had suffered a sun stoke and jerked as he walked. His pocket was always full of candy for the kids. On the subject of worry he had some expert advice. He said that he would go into his garage and tell God everything that he was concerned about and then jump through the door as fast as he could slamming it quickly behind him.

I think Mr. Kidwell had the best approach.

Dwight L. Moody, the evangelist of the 19th century preached a sermon on the beloved passage we all know but none of us live-Philippians 4: 6-7. Read the text first:

Be anxious for nothing, but in everything by prayer and supplication, with thanksgiving, let your requests be made known to God; and the peace of God, which surpasses all understanding, will guard your hearts and minds through Christ Jesus.

His succinct outline went like this. Perhaps you'll remember it for your next big worry-fest:

Worry about nothing.
Pray about everything.
Thank God for anything.

I've not lived this verse very well either, but I do think about it often and meditate on it a great deal. When we refuse to worry, we are saying that God can handle this situation. To do otherwise is an insult to an all-powerful and loving God.

Worry destroys a lot in us. It mitigates against living faith, the only way we have to please God. It is a sin, plain and simple.

But, worry will probably show its head again the next time you are aggravated with an "issue."
In such times, don't forget the garage.

(Another great article about being bold in our faith, by musician Steve Camp, can be found HERE: http://www.christianworldviewnetwork.com/article.php/2507/Steve_Camp -DonB!)
Posted by DonB! No comments:

These are posted here for the kids on Wednesday nights to find and copy. You are welcome to read them too.

1. You shall have no other gods before me.

2. You shall not have any graven images (idols)

3. You shall not take the Lord God's name in vain.

4. Remember the Sabbath day and keep it holy. 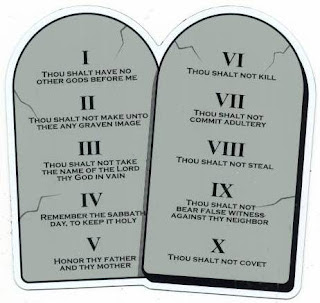 5. Honor your mother and father.

7. Do not commit adultery.

Did you get them all?
Posted by DonB! No comments:

Email ThisBlogThis!Share to TwitterShare to FacebookShare to Pinterest
Labels: Christianity

Wow. Time flies. When you are having fun!

September 1st found me doing the "Dr. of Merriment" Show at Inspiration Point Camp in Western Minnesota. They had a great turnout of people, and I've already booked another show from it in Fergus Falls, MN. for 2008. My kids, Deanna and Dale, both performed their unicycles in the show too (Mom was in CA running a 1/2 marathon; GO MOM!) I look forward to going back there again in the future. I especially want to thank Tara for all of her work in getting me up to Inspiration Point. Thanks to Greg and Janet for their encouragement, and to Pete for running all of the sound for the show. You folks have a great thing going at Camp. See you again some time.

September 2nd I drove back up to Trout Lake Camp, for my ???10th??? time there. This time, the room was absolutely packed. Standing room only in the back. James Rock, the program director, requested I perform the spinning plates in the show, so I did. It worked, but not without 4 or 5 broken plates all over the stage. Dale, my son, tossed me the plates as I needed them, and together we managed to break a couple of more by not catching them. One plate even flew past Dale, off the stage and onto the hard floor. It SHATTERED! For the message, I tried out the newer 3-ball message that I built while in Alabama last month. I think that even though it is not "magical" in effect, it still tells the story of God, the fall of man, God's love for us, Christ's love for us, and the ability to have our sins forgiven and beginning living the life that God created each one of us for. If YOU have seen this message/routine, and have any comments on it (good or bad), please email me with them, or click on the COMMENTS word below to submit to me your thoughts.

James Rock, the program director at Trout Lake, is a real go-getter, with great ideas, and the wonderful ability to get things done in a fashion that is God-honoring, fun for campers, and makes everyone excited about God and Christ. To read an article James wrote, click HERE. I'm thankful that James has put his trust in my programs over the years and allowed me to be a part of family camps so many times. James, you ROCK!

September 6th had me over in Moundsview, MN, doing 6 shows for Pinewood Elementary's Reading Program kick-off event. The shows were really fun, but somehow I was put into the only room in the school without air conditioning. It was 95 degrees outside, and about 90 degrees inside. I survived just fine thanks to 4 fans that the school staff brought in. Thanks also to Julie Pidde and Principal Bill Book for working out the details for all 6 shows. It was great performing for and talking to your kids.

On the 7th, I did some meet and greet for the national Hummel Figurine Convention in Minneapolis. I also did a 20 minute show with some folks from the audience, including the Egg Bag, the Bowling Ball and the Toilet Paper Routine. It was fun. I was dressed as Rocco Fischetti, whom I had never really thought about. I always imagined it was some imaginary character that Metro Connections had made up. Well, at this event, a lady was there, WITH PICTURES OF THE REAL ROCCO FISCHETTI, an Italian-American mobster. It was almost surreal,standing there talking to a lady that was related to, and had pictures of, the character that I was playing. Really weird.

Gotta run. On my way to Ogema, Wisconsin for a show tonight.

Have you ever wondered what it takes to put together a touring show of 9 performers from around the country? Well, Ben Christensen took many hours of video from the tour, including rehearsals, and put them onto 3 DVDs for each of the performers from the tour. You say you don't want to watch 3 DVDs?

Well Ben also just loaded a 10-minute short video onto YouTube.com for you all to see. I pop in and out of various places on the video, and you can also see my 14 year old daughter, Deanna, as the assistant in the "Zig-Zag" illusion.

Keep in mind as you watch it, that when you spend 12 days with 8 other crazy (and Christian)people, it begins to rub off on you. I especially like the very last 15 second clip of the video.

Enjoy the video by clicking HERE

I was given this cartoon, and thought many of you would get a laugh from it.

Permission to print this was granted, by the author, Dan Piraro, on 9/6/07. To view Dan's many other "off-center" comics, please visit his website: www.bizarro.com . Dan is definitely the guy with a tangent view of life. I really like his work.
Posted by DonB! No comments: