"Sens de Vie" Tour is done for this year

Well, another year of touring with the "Sens de Vie" show has come to an end.  We covered a good portion of the country, and finished up fairly close to home. At least for me.
We traveled to Panama City, Florida, where we actually has enough time to throw a Frisbee around on the beach for a couple of hours.  Here is the crew from that day: 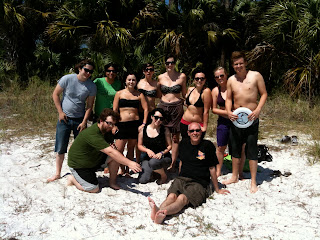 Front: David, Amber, Don
Back: Adam, Zuri, Sarah, Bex, Beth, Julia, Katie, Harris
While waiting in Nashville for 4 days, we had some time to go geocaching, and my favorite cache location was this statue of guitar legend, Chet Atkins. The tiny geocache was hidden up, under Chet's bronze jacket.  Wish I could have met the real Chet. 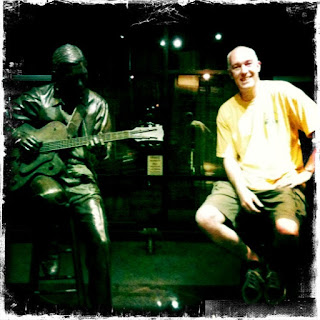 While in Georgia, I had the great opportunity to meet up with a friend, Luke Davis, and his Mom, Laura.  I met Luke at the TNT Clown Conference a few years agao, and have kept in touch via the phone.  I was glad that they made the trip over to see the show, and so that Luke could see how my clowning and slapstick are still developing after all these years. 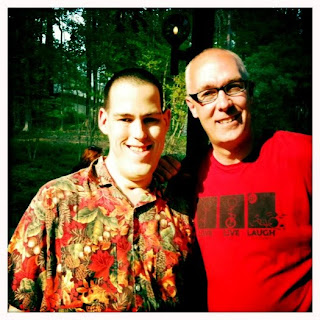 Our show in Ada, Oklahoma, took place in a newly renovated place, the McSwain Theatre.  The Chickasaw Nation purchased the theatre, and spent untold amounts of time and money to renovate it back to it's historical condition when it was new in the early 1900's.  The woodwork, the stage, the velour; it was all incredibly redone.  I think it was the classiest place I've performed in a long time. And the crew there was amazing. Servants at heart, wanting to make everyone look and sound the best that we could.  And, I was happy to see my name scrolling across the marquee outside.
As Navin Johnson would say, "Look, I'm somebody!!!" 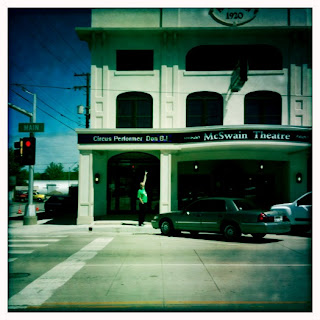 On the last 4 day leg of the tour, all of the driving was to happen at night.  To avoid the need for any of us to do the driving, we travelled on a really nice tour bus, pulling all of the equipment in the trailer.
In Eldora, Iowa, we parked below a large wind turbine, and I thought it would make a nice picture. 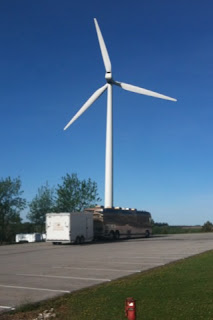 As great as the tour was, it ended on somewhat of a sadder note.  First, I found out that a good friend, who had a very progressive form of cancer, had passed away on that Sunday.  As for the rest of the tour group, they were warned of the massive flooding in the Nashville area, where they live.  Here are two pictures, the first is of us resting in the park about 2 weeks ago.  The second one is that same park, completely under about 4 feet of water. 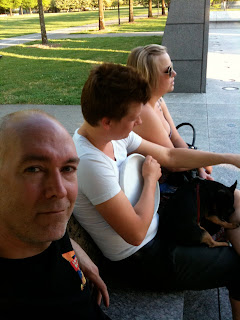 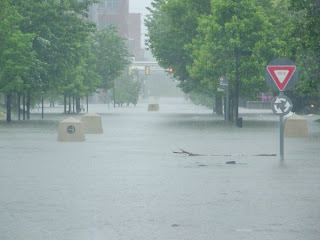 Please pray for the family of the cancer patient friend of mine, as well as the folks from Nashville that have been hit so hard by the rain and storms.
DonB!
Posted by DonB!