I was shown a website that generates word images based on blog feeds or internet sites.  So I tried it, and it generated this image: 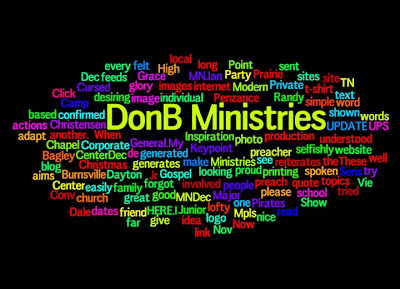 Now try it with your own text. it would make a great logo or t-shirt printing.

UPDATE: I forgot to give you the link to the site. Click HERE.
Posted by DonB! No comments:

I am so proud of my family.  They were all 3 involved with the Junior High production of the Pirates of Penzance Jr. at our local high school.
Click HERE to read about it, as well as see a nice photo of Dale as the Modern Major General.
Posted by DonB! No comments:

My good friend, Randy Christensen, sent this quote to me.  It reiterates the idea I've felt for so long that the Gospel, spoken in simple words and actions, is most easily understood by most people.

“Cursed be every preacher who aims at lofty topics in the church, looking for his own glory and selfishly desiring to please one individual or another.  When I preach I adapt myself to the circumstances of the common people.  I don’t look at the doctors and master…but at the young people and children.  It is to them that I devote myself.  Take pains to be simple and direct.”

I returned home from Dallas, Texas, yesterday, and I slept about 10 hours last night into today.  Needless to say, I am tired.
I flew into Albuquerque, New Mexico, and was picked up by a friend from Sandia Presbyterian Church, Mike Malony, who took me around Albuquerque until it was time for lunch.  We had some great Mexican food, and then he dropped me off at the hotel for a little rest.
The rest of the Sens crew showed up that afternoon, and we all got a good night's rest.
On Friday we did the show in Sandia Presbyterian Church to a very responsive group.
We then drove down to Ruidoso, New Mexico, arriving early in the morning hours.  I was able to get about 5 hours of sleep before heading over to the venue at noon to help with the set-up that Josh and Danny has begun at 9 AM.  This time the stage size was very small, but everyone agreed that we would do the full show on it anyway.  And we did it.  It involved a lot of lifting of illusions on & off the stage throughout the show, but the audience never knew the amount of work we were doing backstage to make it happen.
We chose to spend the night there in Ruidoso.  The next morning it was remembered that BJ was supposed to do a presentation in the church in Artesia that morning.  So with Josh at the wheel, we were able to make the drive in lightning speed, just in time for BJ to walk into church at 10:20 for his part.
While he performed at church, the rest of us went to the show venue and began the set-up.  Of all of the volunteers that helped us on this tour, the guys in Artesia were the best.  When the winch we use broke during load-in, two guys sat down on the floor and fixed it.  When the 2 big illusions that I am responsible for needed assembling, at least 6 guys jumped in to help, setting record time for complete set-up.  (Usually it takes about 1.5 hours to set-up the 2 big illusions.  This day we did both in under 25 minutes!)
Here's an idea of what our day is like on the road:  I wake around 6:30AM, eat, shower and pack.  I start unloading by 9 or 10AM at the venue.  Unloading takes about an hour, depending on how many extra people help us. Set-up takes until about 3 or 4 PM, when we usually sit down to a quick dinner backstage.  The doors open at 6, with the show at 7 PM.  The show runs just over 2 hours.  We go out and meet the audience in the lobby for about 30 minutes, and then change I change out of my performing clothes.  Tear down takes about 90 minutes.  Loading takes another 60-75 minutes, and then we go for dinner somewhere.  I have been getting to bed by 12 midnight (at the earliest) and 2:30 AM at the latest.  The next day we do it all over again somewhere else.  IT'S A BLAST!  Really!
All 3 shows these days went really well.  Almost all of the technical and staging glitches were gone, and the audiences were so responsive.  All 3 shows ended with standing ovations.
When I think about the "Sens de Vie" show, it amazes me that with only 6 people on the road (and one dog), that such a large production can happen.  It is a HUGE show for 6 people to do, but it happens, and has done so for almost 10 shows now.
Please stay tuned to my blog here, or to BJ's website for future dates to be announced.  Or, join us in Dayton, Tennessee, on November 16th for this year's final "Sens de Vie" performance.
NOTE: Wonderful pictures to be posted here after this weekend.  I've seen them, and they are fantastic!
Posted by DonB! No comments: