This is my latest product of Photoshop: 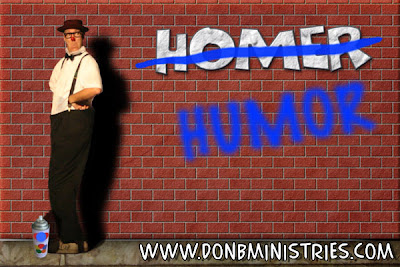 Send me any comments you have.
DonB!
Posted by DonB! No comments:

The first thing I do when I meet someone with a grouchy attitude is to find myself thinking, "What could have possibly happened that was so bad that they act that way?"
Those that have known me for years know that I used to react in an exaggerated way when things upset me. I got extremely angry and outspoken. It was a terrible thing to be known for.
I would like to think that I now take a different approach to anxiety, frustration and other upsetting circumstances. Due to my own off-center sense of humor I tend to allow things to roll off my back much easier, and go on with life as it should be instead of how I want it to be.
Humor is a life-saver, and here are some great quotes I've found:
Humor is the affectionate communication of insight.
Leo Rosten

If you could choose one characteristic that would get you through life, choose a sense of humor.
Jennifer Jones

A sense of humor... is needed armor. Joy in one's heart and some laughter on one's lips is a sign that the person down deep has a pretty good grasp of life.
Hugh Sidey

Analyzing humor is like dissecting a frog. Few people are interested and the frog dies of it.
E. B. White
Enjoy life and all of the surprises it brings. Many times your two choices are to laugh or cry. Trust me, laughing will take you much further, and give you more, needed relief.
Happy almost New Year.
DonB!
Posted by DonB! No comments:

Email ThisBlogThis!Share to TwitterShare to FacebookShare to Pinterest
Labels: humor

An interesting thing happened on the way to school

Today, my daughter, Deanna, asked me to come into her history class and show a few of my favorite magic tricks.  It is only a half-day of school before Christmas vacation, and there really aren't any assignments being handed out or getting turned in.  Why magic tricks in a history class?  Because Deanna's history teacher also does some magic in the classroom, and when Deanna told him what I do for a living, he suggested she bring me in some time.  So I did.
Why do I tell you this?  Deanna feels challenged by this teacher on more than one level, mainly because of her faith.  But when Deanna told him I was a professional magician, he said "prove it", and bring me into class sometime.
Apparently this teacher has also asked Deanna to defend her beliefs from time to time.  From Deanna's recollections, this teacher is not a Christian.
This teacher asked her "how can you believe in creation, when you can't prove it?"  She said he asks other similar questions, regarding God, Jesus, Christianity, etc.  Not because he believes, but more as if he's asking, "How can you possibly believe THAT?!"
My first reaction was to think, "How dare he question her belief system, when he can't prove his own beliefs, such as species-to-species evolution, entropy is regards to higher evolution and other small things like that."  But then, things changed.
In MY mind they changed.
I realized that the quote by Friedrich Nietzsche stating,
"That which does not kill us makes us stronger"
is true in this situation.  I think EVERYONE, regardless of what they believe should be questioned and challenged about WHAT they believe, WHY they believe it and what the BENEFITS of their belief system are. If you don't understand your OWN faith, then why believe it in the first place?
I think that if this teacher is simply challenging her to explain her beliefs, and not belittling nor condemning her for them, then I think it will deepen her understanding of her Christianity.  It's not going to kill her to be faced with those questions, so my hope is that it will MAKE HER STRONGER.
Does this mean I can explain every little nook and cranny of knowledge about God and Jesus and Christianity? Obviously not.  But neither can scientists explain every nook and cranny about how the universe came to be, how species evolved from one to another, how if the universe is slowly running down how can there be higher life forms "evolving" from lower ones.  I understand the evolutionary process involving "survival of the fittest", and how lions get to be stronger lions, giraffes get to be taller giraffes, but not how an iguana "evolved" into a dog.
I believe what I believe because 1) it makes the most sense to me, 2) it brings a hope and peace that I couldn't have if I trusted only in my own self for my survival, and 3) it has changed my life.  If studying evolution brings those things to someone else, that's wonderful.  For them.  For now.  But I hope he/she is ready to defend what they believe the same way that I am challenged to defend what I believe.
In the end, I have put my hope in God and the promises that he has laid out before me in the Bible.  Am I an idiot?  Some people would say so. But I'm sticking with it.
Oscar Wilde summarized it this way:
A man who does not think for himself does not think at all.
Think about it...
...and have a merry Christmas.
DonB!
Posted by DonB! 1 comment:

Greetings everyone. As we get nearer and nearer to December 25th, lights go upon houses, stockings are hung, we eat too many wonderful baked goods, and the music programs become more abundant.

Our church musical, "Journey to Bethlehem", as well as the high school choir concert, were both postponed due to the frigid cold we had last Sunday. The church musical was presented on Wednesday instead and all went well, despite the music director being laid up at home in bed. The high school musical is rescheduled for next Monday. 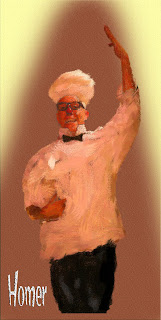 This is the first in 6 years that I have not worked for UPS during the month of December, due the desire to get a lot of my own ministry tasks accomplished. I spent about 60 hours editing and reediting the church musical video segments. I've been learning more and more about PhotoShop and the fun ways to use it. I'd love to say that I've spent much of the time cleaning around the house, but...(insert laughter here).
I've been working on a couple of new routines for my shows, but I can't disclose what they are at this time until they are done and ready to try out on an audience. Watch for them: one has to do with fishing, and one has to do with juggling, but it's not by me. I also have started working on a bigger project that should be ready by Summer, and it will start showing up at corporate events by June (I hope).
Our family has chosen to spend less $$$ this year at Christmas time than in the past. One of the things we opted not to do is set up a Christmas tree (it was already December 6th). Deanna wasn't too happy about that, so she and 2 of her friends took the task upon themselves, and when we arrived home that weekend, we found this sitting in the living room: 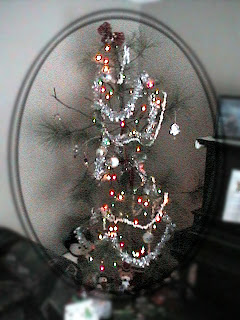 It looks very Charlie Brown-like, and we love it. I think there are less than 100 total needles on the entire tree. We love it.

I want to encourage all of you, whether these are lean times or richer times, to simply think about all of the blessings that your family has experienced this year. Take a moment and thank God for his great love for us, and for the birth of his son, Jesus.