Smart words from the cafeteria

It may seem strange that I would find inspirational words of wisdom at a museum, especially one as strange as Wisconsin's House on the Rock. But while I visited there last month with Ben & Randy Christensen, we took a few minutes to sit down and eat lunch in the public cafeteria. On each table throughout the room, sayings were carved into the tables, many of which I really enjoyed.
Here is one: 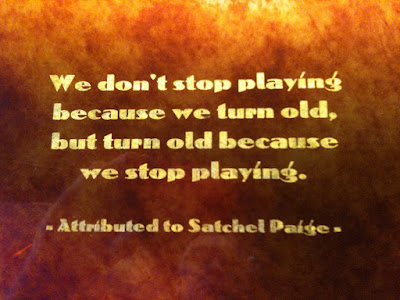 I love this one, maybe because I use it to justify my strange, but wonderful way of making a living.
Another saying that I've liked says, "Life doesn't consist in having what you want, but in wanting what you have". Here is one that goes alongside of that one: 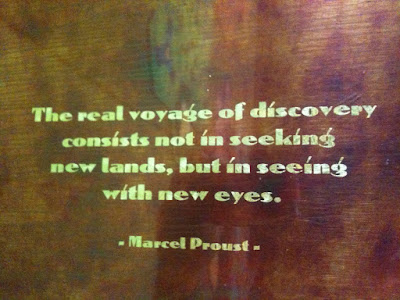 It's not always about learning new things, but instead, figuring out ways to do the same old things with a new perspective. In the hard times of our economy, maybe one part of the solution isn't to change our circumstances, but to change our perspective on what we can do with what we already have.
Sometimes results come from personal sacrifice. If so, then this one makes complete sense: 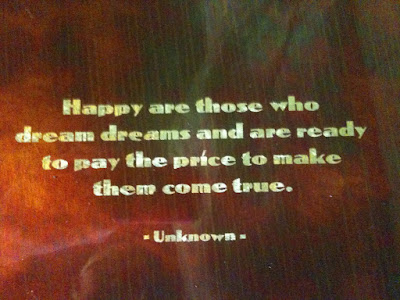 Are we willing to pay the price of what it takes to accomplish great things in our lives? Or are we living in the age of "entitlement", where we should be allowed to have everything we want without the personal sacrifice it takes to reach those goals?
I am encouraged by what I have heard spoken lately from some teenagers. They are many times referred to as the "generation of entitlement", but I have heard quite a few of them talk or write about doing without, whether it is designer clothes, expensive hobbies, etc. To those teens I say, Right On! (How 80s is THAT saying?!?!?) 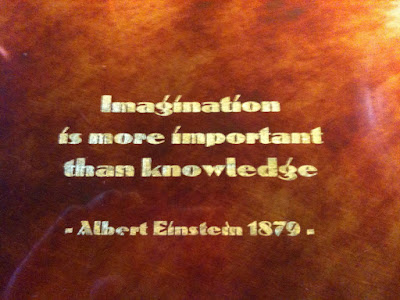 He was a smart man.
Over the years, another way that I have justified my performing for a living is by comparing myself to others that complain about their jobs, their bosses, their co-workers. And I've wondered, why not go out and find a job that you love? One that brings you some joy? 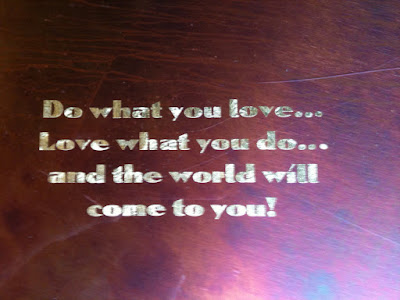 My work isn't all joy, but I sure do love it.
Kids have very active imaginations. They can be Superman today, and working with Legos on Mars tomorrow. Carl Sagan said this: 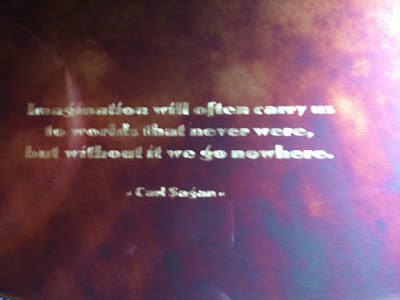 "Imagination will often carry us to worlds that never were, but without it we go nowhere."
Carl probably had a great imagination, but I fear that it could have taken him to a world that he never dreamed of or was willing to acknowledge.
When I was young, people would watch me learning to ride my unicycle, and would say "those are impossible". It wasn't, and here is a confirmative quote about it: 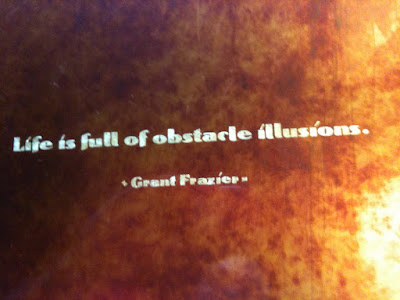 To a 10-year-old, nothing is impossible. Obstacles are ONLY illusions.
Another "enjoy your work" quote is this one: 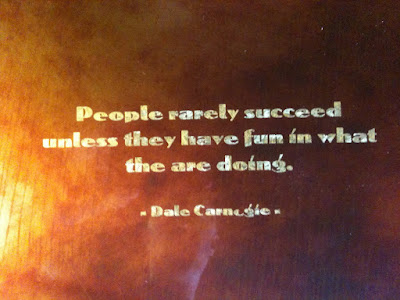 And finally, to all the critics that think adults don't have time to play games, or that a 16-hour work day is the only way to succeed, I give you this wonderful quote from T.S. Elliot: 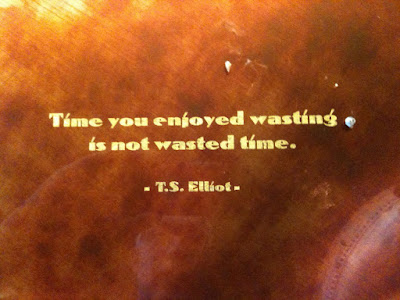 And now, I'm going to waste some time cleaning up my office. And yes, due to all of the weird and fun things I know I might encounter in there, I will make the best attempt to enjoy it.
Have a great day.
DonB!
Posted by DonB! No comments:

My good friend is a new Dad!

I want to tell everyone about the good news of one of my close friends.
His name is Mark Zubert (many of you know him already), and he and his wife, Erin, gave birth to Lincoln Beckett yesterday. Mom, Dad, brother Westin and new baby are all doing great.
To top it all off, today is Mark's birthday!!! A double hitter.
Congrats to the growing Zubert family. 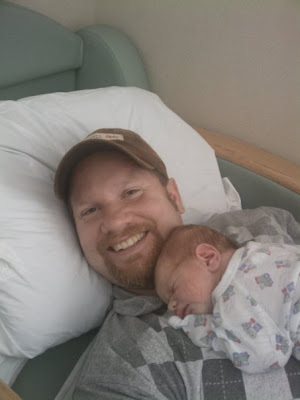 Mark and Lincoln Zubert
Posted by DonB! No comments:

Anyone want to attend a Photoshop Seminar with me?

On October 21st, I plan on attending a seminar at the Minneapolis Convention Center to learn more about Adobe Photoshop.
The seminar is all day, for $99, and even though it is geared toward CS4 users, all Photoshop people will learn an extensive amount from it.
You can see more about it HERE
If you want to go, let me know, and I'll see you there.
DonB! 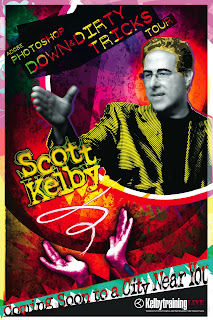 Email ThisBlogThis!Share to TwitterShare to FacebookShare to Pinterest
Labels: Office

I will be performing at Ashland University in October with illusionist, Harris III, and an article is online promoting the event. Click HERE to read it. It's a quick read.
DonB!
Posted by DonB! No comments:

Email ThisBlogThis!Share to TwitterShare to FacebookShare to Pinterest
Labels: articles, Christianity, DonB on the web, performing

DonB! trip to the East Coast

On Sunday, I left to begin my 10 day trip to the East Coast. In one day, I drove from Minneapolis, Minnesota, to Nashville, Tennessee. 14 hours if I drove it straight through, but I needed fuel and food throughout the day, so the trip lasted about 16.5 hours.
While in Nashville, I visited with BJ & Katie Harris, and we talked about some routines and ideas for the upcoming October Sens de Vie tour.
One afternoon, I decided to go out for a walk, and ended up at Bicentennial Park, right in front of the capital building: 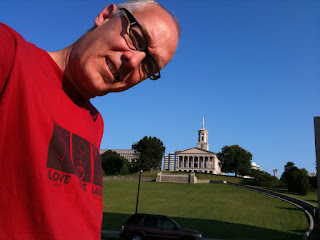 I promised Debbie that I would try and eat healthy for this entire trip, so it was with great joy that Katie & BJ were also going healthy for the week. I was able to eat Katie's homemade spaghetti sauce, as well as homemade breads and desserts (healthy ones, of course): 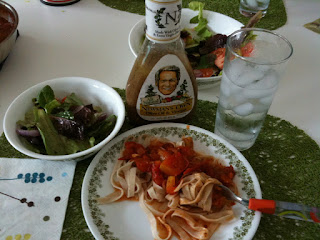 The next day we all played Frisbee on the HUGE green lawn of the capital building. While reading all of the history of Tennessee at the park, I was able to have my picture taken in the outdoor amphitheater there. It is really big, and may be a possible site for a future program. Hmmmm..... 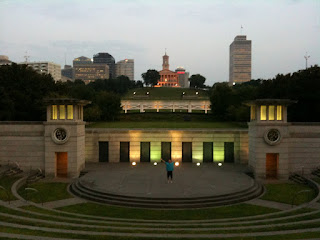 I left Nashville on Thursday, headed to Sandy Cove Ministries in North East, Maryland. On my way over, I was able to spend the evening with long time friends, David & Rachel Pribulick and their 3 intelligent kids (they all converse like adults).
At Sandy Cove I did one show on Friday evening for the 300+ people that were already there, and one little girl gave me flowers after the show. Nice. 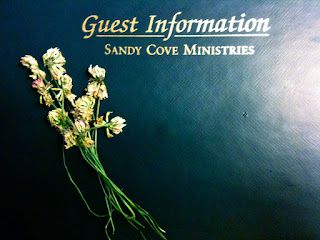 When I arrived at Sandy Cove, I saw on the brochure that they had a trapeze set-up for summer, but I was disappointed to see it sitting here in the parking lot: 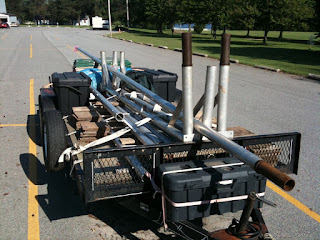 Sandy Cove has everything, ranging from tent camping all the way up to "The Lodge", with hotel-like accommodations. I stayed in this building: 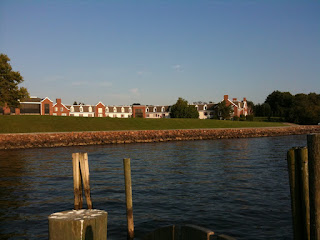 On Sunday night, the entire 700+ campus of people were in attendance, and the house was rockin' I had opportunity to push my improv abilities to the limits with the fun, but interesting volunteers I chose from the audience. I love having kids onstage because you NEVER know what can happen. Kids think "in the moment", and react accordingly, making for entertainment with a twist at almost every show. Here I am, ready to go onstage... 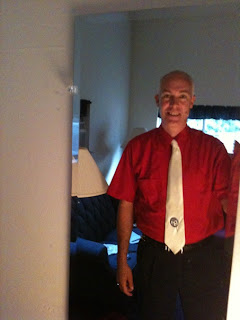 Someone from my Ringling Brothers/Disney days, John Hadfield, drove over from Delaware to catch the show, and we went to dinner afterward. John ordered a crab-something-or-other sandwich, and when it arrived, there was no doubting what it was. It looked exactly like a crab, legs, eyes and all. John slapped in on a bun and crunched his way through the entire thing. Here's what I had to look at the whole time: 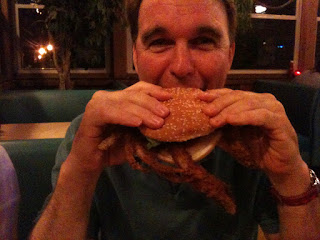 Yes, those are legs hanging out of the bun. Eeewwwwww.....
Then, as I made my way across Maryland towards home, I was able to stop and visit with another friend from Clown College '84 (yes, that's 25 years ago), Mr. Kevin Brown and his family. We went to breakfast, talked a little about magic, and did some great catching up of long ago memories. It was great to see him again. 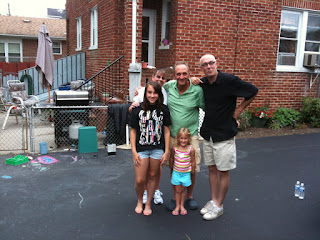 Finally, what good is a drive across country if I didn't take time to stop and pick up a few geocaches? One of them actually takes you hiking down into a lowland park, and then back around the underside of a waterfall. Standing there, I just had to try and get a picture: 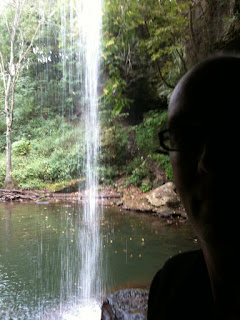 One was in a hilltop cemetary in the middle of PA: 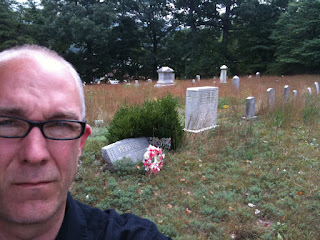 And 2 were at Vietnam Veteran Memorials: 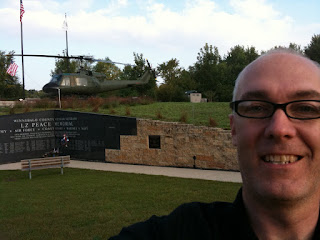 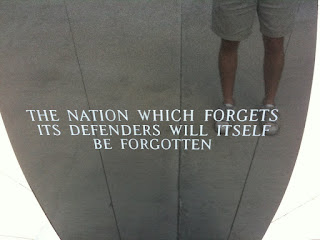 So amazing is this world we live in.
On Tuesday evening, Debbie met me at the airport (so that I could return the rental van), and we headed off to dinner together. No matter how nice the memories are of traveling on the road, THERE'S NO PLACE LIKE HOME.
Another trip in October, so watch for the story here.
DonB!