Last Wednesday, my friend, Mike Norton, and I, left Mora at 7AM, and drove down to Minneapolis to pick up one more friend, Ben Christensen.  We gassed up the van, and headed toward Chicago.  We were home the next morning by 7:30 AM.

Every year, right before the Magic Collector's Weekend (yes, there is such a thing), there is a magic flea market near Schaumburg, Illinois.  Magicians come from around the country to buy and sell their used magic props, illusions and books.  Mike & I decided it was time to do a little magic house cleaning of our own, and gathered about $800.00 worth of things we were intent on selling.  We did well.

All combined, the three of us sold about $700.00 worth of props and books we no longer use.  That's the good news. 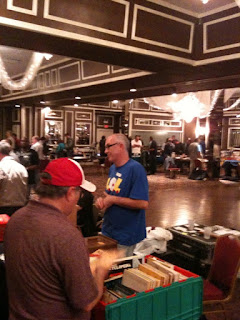 Don, at the booth.
The flip side is that we were also going with our eyes open for items that we could add to our own shows, and we did.  Mike can now make it seem as if a kid can float in his show.  Ben can make it seem as if his head, covered in a small box, can spin 360 degrees in any direction, in a very comical fashion.  I found a great book for $40 (retails for $150), a famous magic prop called Mental Epic for $40 (retails for $250), as well as some smaller items that I can use in my shows and close-up magic gigs.

As soon as the flea market was over, we loaded up our wares and took off back to Minnesota.  We drove through the night in order to get back to Minnesota in time to meet our obligations elsewhere.

It was a lot of driving, and many miles, but all in all, we came home with a little more money than we left with, and each of us found some really neat bargains.