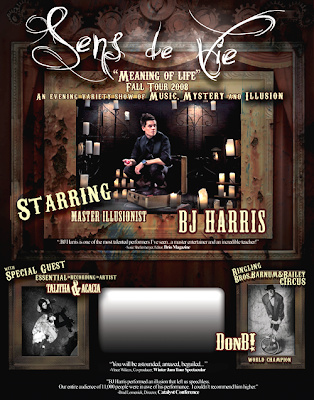 I'm writing this from a big RV that I am travelling in with 5 other people. We are returning back to Franklin, Tennessee, after presenting the first show of the "BJ Harris Variety Road Show" in Jekyl Island, Georgia. This was the first show of a tour that is being named "Sens de Vie" which means "Meaning of Life".

It was a 2-hour show, obviously featuring magician/illusionist BJ Harris. I was involved with the show as the preshow act, the juggler, the unicyclist and the plate spinner. Right before going onstage for my first act, the lapel microphone I was scheduled to use wasn't working properly. On a whim, I said "I'll do it all silently, without talking." I wasn't sure how I was going to accomplish it, but IT WORKED!

I performed my Ring Juggling routine, followed by the Unicycle Medley. Performed solely to music, it was a challenge for me, but it was a challenge I enjoyed. In the 2nd half of the show, I then performed the Spinning Plates routine that many of you have seen over the years. I was told afterward, by the producer of the show, thhat it was this routine that "makes it for the audience". In other words, he felt that this routine was the capstone of what my character can be/do. It was a good compliment.

I had a little time to see the ocean, take a 2 hour morning walk and listen to a couple of sermon podcasts while I walked.

I will post some pictures, as well as links, when I get home to Minnesota tomorrow.